The Best Picture Winners: The Bridge on the River Kwai (1957)

Oscar’s 90th birthday is just around the corner and to celebrate, every other day from now through March 4th, I will be taking a look at each and every film selected for his top award – the good, the bad and the sometimes not-so deserving. 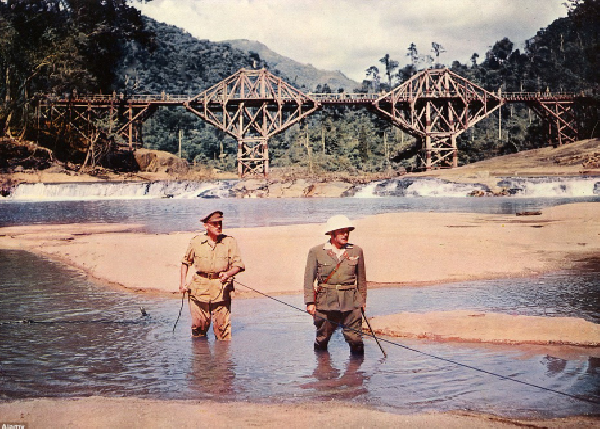 Another year, another epic, another battle with television.

A good number of the Best Picture winners of the 1950s seemed to be indicative of Hollywood’s desire to battle the advent of television by creating enormous full-color epics that one couldn’t find as part of the minuscule landscape of “the box” (some of which still don’t)  Alas, at times the splendor outweighed the intent.

The Bride on the River Kwai takes place within a Japanese prison camp during World War II, located somewhere between Siam and Burma, and focuses on the personal battle between a resolute by-the-book British Colonel (Best Actor winner Alec Guinness), the camp commandant (Sessue Hayakawa) and an escaped American (William Holden) in a battle of wills that heads off with a competition between the officers over the construction of a railroad bridge and the American’s attempt to sabotage it.

The achievement is Lean’s trademark of allowing intimate character relationships to flourish in the midst of a grand epic canvas.  Sadly, that canvas obscures the film’s biggest weakness.  The story is compelling but, truthfully, not for three hours.  I think maybe I got the point in two and I didn’t need a lot of extra material to drive the point home.

Plus, I’m a little dismayed that the movie’s challenge to the audience is undercut.  For a while, we are sort of left on the fence about who is right, and that makes for a great, challenging and thought-provoking story.  But it is cut down by the ending, which seems shockingly simple-minded.  Plus, it has always bothered me as to why Guinness’ Colonel doesn’t come to his famous “My God, what have I done?” until long after his revelation should have come about.

Yet, as an anti-war statement, a better choice would be Stanley Kubrick’s Paths of Glory released the same year.  That film, shot on a smaller scale and in black and white stares the anti-war message square in the eye in a way that Lean’s film does not.