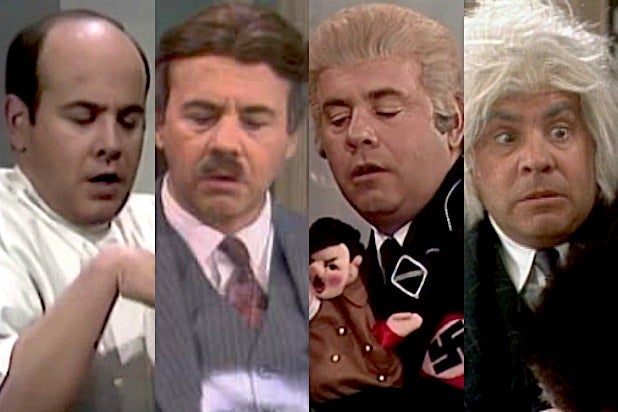 Tim Conway, who passed away Tuesday at the age of 85, was one of the funniest people who ever lived, and I absolutely mean that.  He was a gifted physical comedian, on par with Chaplin, Keaton and The Three Stooges.  His comedy was effortless, unpredictable and explosively funny.

It wouldn’t surprise me if the term “rolling in the aisles” was invented in reference to Tim Conway.  At his best, he didn’t simply make people laugh, he made people hurt themselves laughing.  They were rolling.  If proof is needed watch any of his best moments from The Carol Burnett Show and listen to that studio audience.  That’s not regular laughter, that’s the genuine sound of an audience brought to it knees.  Very few comedians could do that.

He spent 60 years in showbusiness and made his way through every medium imaginable from Ensign Parker on “McHale’s Navy” to this work on “The Steve Allen Show” and even the ill-fated “Turn-on”, a misfire from “Laugh-In” creator George Schlatter that the network thought was so bad that they cancelled it while the premiere episode was airing.  There were the movies with Don Knotts: The Prize Fighter and The Private Eyes.  There were the Disney pictures of my childhood like The Apple Dumpling Gang, The Shaggy D.A. and Gus.

Conway was always best as part of an ensemble – which is possibly why his own shows never really worked.  He tried a sitcom “Rango” in 1967 which flopped.  As did his comedy variety show “The Tim Conway Hour” in 1970.  After “The Carol Burnett Show”, he would try again with “The Tim Conway Show” in 1980, a show that mirrored Burnett’s show probably too closely and died in a year.  Even when he was the lead in a movie, he had trouble as evidenced by the godawful Billiion Dollar Hobo in which he plays a bumbling dope who stands to rake in his uncle’s inheritance if he can spend a year riding the rails as a penniless hobo.

He was best when he had someone the play off of.  That’s why “The Carol Burnett Show” will be his legacy – he won three Emmy Awards for it.  That show, which ran eleven years from 1967 to 1978 was part of CBS’s legendary Saturday Night line-up called “Murderer’s Row” that also included “The Mary Tyler Moore Show”, “All in the Family” and “M*A*S*H” – and was called such because it killed the ratings of whatever shows were running concurrently on NBC and ABC.

Of all of those CBS shows, “The Carol Burnett Show” is the one that has had the least staying power.  Watch any random episode on a given night and you can clearly see that it hasn’t aged well.  Like “Monty Python’s Flying Circus” it is best viewed in a “Best of” format that cherry-picks the best skits, and most often they are dominated by skits involving Conway.  His best bits were the physical ones, whether is was Mr. Tudball, the flappable boss with the Scandinavian accent and unfortunate toupee that inevitably ended up in his face, or artillery captain in the French army who attempts to load a cannon but ends up dropping the ball down his pants.  Or even Mr. Bunny, the rabbit lawyer who tries to keep his professional composure while constantly giving in to his rabbit tendencies.

Yes, Carol Burnett, Harvey Korman, Vicki Lawrence and Lyle Waggoner made up a company of sketch comedians that cannot be beat, but for my money it was Conway that made it great.  He had an innate ability to not only draw raucous laughs but to also to create those perfect moments when he broke up his co-stars, angling their timing and their professionalism into fits of sweating and stifled laughs.  There was always a moment when Burnett, Waggoner, Lawrence or Korman knew that Conway was trying to get them.  You could see it in their eyes.

One of my favorites was a sketch called “The Interrogator” in which Waggoner played an American POW being interrogated by Conway who was playing a Nazi.  Trapped in a two-shot, Waggoner does a valiant job of keeping his composure as Conway baits him, but when he produced a rosy-cheeked hand puppet of Adolph Hitler from his coat, Waggoner knows all is lost.  When puppet-Fuhrer launches into a squeaky-voiced rendition of “Someone’s in the Kitchen with Dina”, you can see that even Conway is trying not to laugh.

Conway’s ability to trap his castmates in stifled laughter fell hardest on Harvey Korman, most evident in a brilliant sketch in which Conway plays a dentist who accidentally stabs himself with a needle full of novacane, first in the hand and then in the leg.  Korman, as the patient, is trapped in the chair and has nowhere to go.  The sketch is funny all by itself but the spice is added by Korman’s failed attempt to keep his composure.

But then it all came back.  Conway’s ability to keep his castmates in stitches finally came back around in a sketch of “The Family” in which his character Mickey recalls the story of two Siamese elephants at a freak show.  True to Conway’s nature, the story gets more and more absurd as Burnett sits just to his left sweating and hiding her face while the studio audience rolls in uncontrollable laughter.  Vicki Lawrence finally breaks the moment by asking “are you sure that asshole’s through yet?”  Conway is a goner.  Does that kind of laughter exist anymore?

Judd Apatow, hearing the news of Conway’s passing had the most fitting tribute, “Tim Conway was pure comedy.”  There is no reading-between-the-lines with that statement because if you know Conway’s work than you know what that means.  He wanted to make you laugh, and to keep you laughing.  You got caught up in his shenanigans and he kept you rolling in the aisles.

Posted by armchaircinema on 05/14/2019 in Uncategorized

← Bowing Out: Doris Day (1922-2019)
Discovering ‘Citizen Kane’: a film-lover reluctantly indulges The Greatest Movie Ever Made. →