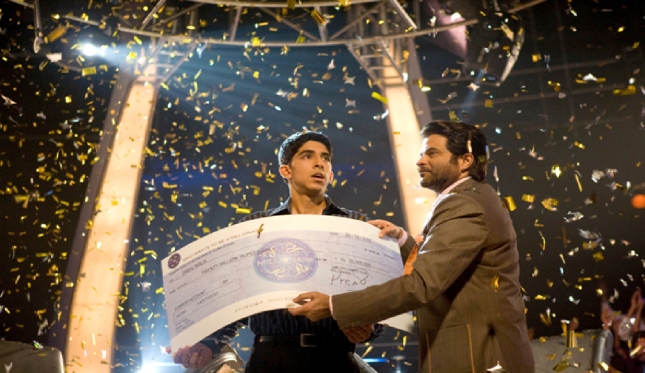 If you’ve been watching the Oscars as long as I have, then you notice that more often then not the winner of the year’s Best Picture is telegraphed months in advance.  With that, you look forward to those rare moments when a come-behind little movie breaks through and makes an impression on the voters.

As a Best Picture winner, Slumdog Millionaire was something of an enigma. Like The Last Emperor, it contained no major stars, took place in a foreign country and was about the strange journey of one man’s life.  The difference is that while The Last Emperor featured a man who is unhappily trapped in his gilded cage, the subject of Slumdog is a kid who rises out of his poverty and finds wealth both financially and in his heart.

The journey involves Jamal (Dev Patel), an Indian teenager who inexplicably ends up on his country’s version of “Who Wants To Be a Millionaire” and is tortured by the security staff when he gets within one question of the grand prize. The staff is suspicious of how a slum kid from Mumbai could have such vast knowledge so, during his interrogation, he reveals how his life’s journey has (apparently through cosmic circumstance) prepared him for the questions he has been given.

I liked Slumdog Millionaire, but I didn’t feel its greatness. I was moved by the love story, about how Jamal falls in love with his childhood friend Latika (played by the stunningly beautiful Frieda Pinto) and keeps her in his heart even through the years apart. Yet, the logic center of my brain had problems accepting the idea that Jamal would be given questions on the game show that just happen to correspond with all of the red letter events in his life. I realize that this isn’t the point, but it was an illogical element that I couldn’t overlook. I am sort of alone in my opinion of Slumdog Millionaire, which many critics thought was one of the best films of the year. More than one critic compared Jamal’s journey to that of Forrest Gump, but Forrest’s journey was driven by the whim of chance, while Jamal’s seemed driven by bizarre coincidence.  For me, that just wasn’t enough.