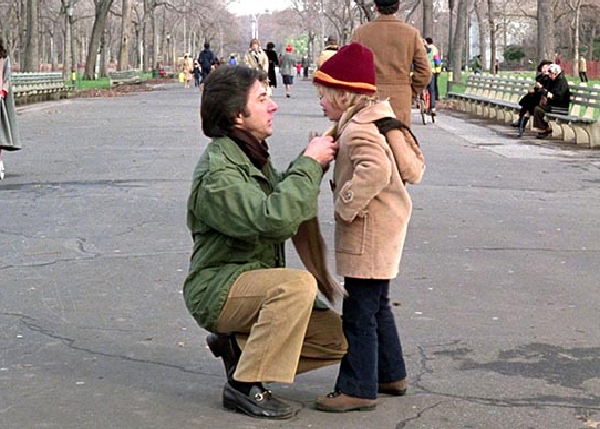 God love The Academy for trying to stay topical.

The divorce rate in The United States was at an all-time high between 1979 and 1981.  So, it must have given the voters of The Academy much pleasure in selecting a film for its Best Picture award that looked the subject squarely in the eye.  At the time, Kramer vs. Kramer was heavily lauded for taking a stand on the emerging cultural shift in the traditional gender roles that was occurring in the country.

Kramer vs. Kramer was based on a sudzy dramatic best seller (which I have read) by a magazine publisher turned novelist named Avery Corman – who also wrote the book “Oh, God.”  It told the story of a work-obsessed family man, Ted Kramer (Best Actor winner Dustin Hoffman) whose wife Joanna (Supporting Actress winner Meryl Streep) suddenly walks out one day because she she needs to find herself, leaving Ted to raise an eight year-old son that he hardly knows.

The movie really held up by two fine performances, first by Hoffman as a befuddled man who can work wonders on the job but is totally out to sea when it comes to dealing with a domestic issue; and by Streep as a woman whose inward trajectory never really seemed prepared for motherhood.

Yet, while I admire the film’s goals, I’m always a little put off by how satisfied this script is that, by its end, it has proven that a man can do a woman’s job just as well as she can.  Also, I’m a little put off by the court decision which allows that Joanna should be given sole custody of their son Billy solely on the basis of the fact that she’s the mother.  She walked out!  She left!  Why is she given custody?  That’s a point that I never really understood and, yes, I know it ends with her doing the right thing, but her initial description should have come with far more bitter consequences.