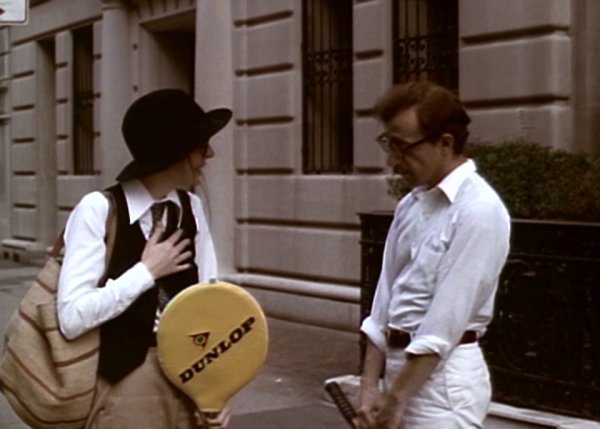 Nineteen Seventy-Seven is forever linked with George Lucas’ seminal space opera, and for good reason.  Star Wars was a film that, for better and for worse, changed the direction of American film.  Yet, in this particular year, Woody Allen would change the direction of his own filmmaking efforts from slapstick to a more sophisticated kind of comedy and the results ever since have been mixed.

This new change in Allen’s template was met with crazy respect from some who regarded his earlier work as good but slight, while others longed for the era of broad comedies.  His gateway to sophistication was Annie Hall, an intelligent look at the speed bumps of a potentially successful relationship from meeting, to courting, to the break-up and all stops in-between.  It was an insightful and wonderfully innovative romantic comedy that accurately portrayed the pratfalls and pitfalls of romantic life as it existed in the 1970s.

What works is that the film is that it is a love story about intelligent people who are individuals, not types.  Alvy Singer (Allen) is a cynical  intellectual gag writer whose affections are linked to Annie (Diane Keaton) a small town girl of simple taste.  It is their backgrounds and their eccentricities that are the fundamental basis for how they approach one another.  He is paranoid and mostly irritated by everything.  She is flighty, dresses like a juggler and has low self-esteem.

The innovation comes in Allen’s fearless variety of film tricks, most of which were new in 1977.  The story is told completely in flashback and begins with the information that by the time we get back to where we started, the relationship has already depleted.  “Annie and I broke up,” Alvy tells us in a wonderful opening monologue and then the movie twists around to tell us how it all went wrong.  Yet, the movie doesn’t count it’s narrative by numbers, it jumps around in time.  One scene will catch up Annie and Alvy in the middle of their relationship and then we will move backward in time to see how they met.  Sometimes the characters will stay in the scene, and often Alvy will break the fourth wall for an interior monologue that helps us understand what he’s going through mentally.

The jumping narrative allows us to see the key changes that are occurring in the relationship and allows us to observe the changes that are occurring in their respective personalities.  A scene will establish a problem in their relationship and then move backwards to move us forward so that we understand where the problem came from.  From most filmmakers this would be a confusing mess, but the glue her is Allen’s dialogue which connects everything together.  Allen and his screenwriter Marshall Brickman weren’t afraid to let their characters be intellectuals.  Would a mass audience seeing the film generally know Marshall McLune?  Balzac?  Sylvia Plath?  No, but it’s important to the characters and we love them for it.

Yet, what is most attractive about Annie Hall are the two leads.  Alvy and Annie create a great love story, the story of two people brought together for no real reason other than they happen to like each other.  Then, through the process, we see how Alvy’s annoying eccentricities pulled the relationship apart.  He spends his time whining about anything and everything and who fills his spare time with books about death and repeated viewings of Marcel Ophuls’ holocaust documentary The Sorrow and the Pity.

The center is always Diane Keaton, who won her Oscar for this performance.  Even through the jumping narrative we can see the growth that she experiences from daffy and silly to later when she is calmer and far more thoughtful.  Annie is a very specific person. There is a vulnerability and an insecurity about her that makes her seem unpolished. She has moments that are pure and funny like the moment when she asks Alvy a question that she knows is inappropriate and smiles while she rolling her eyes, admitting “Oh dear, what a dumb thing to say” but letting it roll off with “La-dee-dah La-dee dah la la”.  Yeah.