The Best Picture Winners: From Here to Eternity (1953)

Oscar’s 90th birthday is just around the corner and to celebrate, every other day from now through March 4th, I will be taking a look at each and every film selected for his top award – the good, the bad and the sometimes not-so deserving. 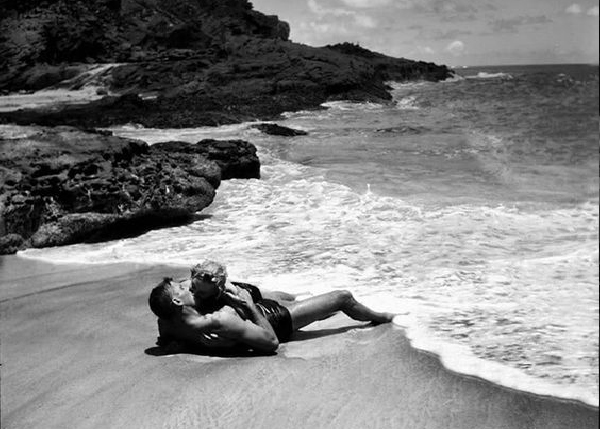 Hot off the success of the crowd-pleasing High Noon in 1952, director Fred Zinneman moved to a more adult venture, an adaptation of James Jones’ seemingly unfilmable 1951 novel.  No one thought it could be done because the book, about the various relationships in and around a Hawaiian Army Base just before the attack on Pearl Harbor, had been loaded with sex and four-letter words that would have to be removed in order to be passable as a film.

I have not read Jones’ book, I can’t see where the absence of explicit sex and language are a hindrance. The film is, essentially, a soap opera that focuses several characters: one, a young, hard-headed recruit (Montgomery Clift) who fights with his commanding officers over his refusal to join the inter-camp boxing league. The other is a tough sergeant (Burt Lancaster) who has a secret relationship with the wife of the company’s base commander. And, of course, there’s Frank Sinatra and his battle with a bullish stockade warden played by Ernest Borgnine.

The performances are great but I’m not really a fan of the film mostly because, at the end when the Japanese attack, it feels as if the film is using the attacks to cover up for having to tie up loose ends with the characters.  The film would win eight Oscars including an undeserved Supporting Actor prize for Frank Sinatra (who hardly gets a chance to sing!) and would go down in history, I suppose for having all those stars tied up in a spicy soap opera.  Me, if I want conflict I’ll watch High Noon.