Oscar’s 90th birthday is just around the corner and to celebrate, from now through March 4th, I will be taking a look at each and every film selected for his top award – the good, the bad and the sometimes not-so deserving. 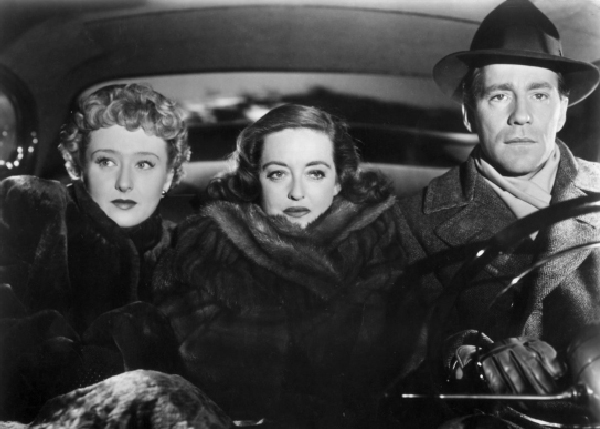 The crushing inevitability of being an aging actress was something that Bette Davis seemed to wrestle with for most of her life.  She wasn’t classically beautiful in her youth and she wasn’t a great beauty as she got older, but her personal battle to keep her career from being washed out to sea by the youth-obsessed denizens who ran Hollywood was so famous that it not only became legendary but inspired a whole genre.  Late in her career she would play a series of psycho-biddies in a genre of hag-sploitation movies that she and Joan Crawford seemed to have inadvertently created; films about aging women driven mad by their obsession with holding on to the good old days.  Those movies were a ghoulish representation, the antithesis of which was All About Eve.

All About Eve has been lauded as one of the best pieces of writing ever to come out of the Golden Age of Hollywood, but at the same time it was also one of the most honest portraits of one of the most troubling aspects of show business: Women don’t have it easy when Father Time oversteps even the most glorious reputation.

In arguably her finest film role, Davis plays Margo Channing, one of the most celebrated actresses on Broadway who finds herself in danger of being nosed off the stage by a rising young starlet (Anne Baxter), a young and beautiful neophyte who warms herself to Margo’s ego despite the fact that underneath beats the heart of a rat.  The movie is not the war of misbehavior that we might expect (or that would have been easier to write) but becomes a reflection on what it means to be a woman in a business that insists on a sell-by date.  Margo has just turned 40 and the inevitability of time will overtake her.

That’s the crux of the character and the legendary script by Joseph Mankiewicz allows Margo to be a fighter (“Fasten your seatbelts, it’s going to be a bumpy night”) while at the same time allowing her moments of deep introspection.  Of all of Davis’ work, I can think of no moment that rings truer than when she sits in the backseat of her friend’s car and begins a long, introspective monologue that seems one of the most insightful and debatable passages ever written:

“Funny business, a woman’s career – the things you drop on your way up the ladder so you can move faster. You forget you’ll need them again when you get back to being a woman. That’s one career all females have in common, whether we like it or not: being a woman. Sooner or later, we’ve got to work at it, no matter how many other careers we’ve had or wanted. And in the last analysis, nothing’s any good unless you can look up just before dinner or turn around in bed, and there he is. Without that, you’re not a woman. You’re something with a French provincial office or a book full of clippings, but you’re not a woman. Slow curtain, the end.”

It is probably true that most women in the 21st century would find fault with Margo’s logic, particularly given that times have changed, but the central logic to what she has to say rings true.  It shows the fallibility of Margo’s realization that no matter how hard she fights, the inevitability of her age will push her aside.  Eventually she will have to return to the limited role that 1950s America had placed on women.  What is remarkable is that Margo’s plight seemed to spill off the screen as well.

All About Eve was released the same year that Gloria Swanson starred in Sunset Blvd as a woman driven mad by the image that has long-since passed her by.  Margo and Norma are different approaches to the same idea.  Margo has far more humanity, while Norma Desmond is a closer representation to the kinds of roles that Davis would play in later years.  At this moment Davis was 42 and Swanson was 51.  Both were nominated for Best Actress and, in a bitter irony, both lost to 29 year-old Judy Holliday for Born Yesterday.  How that for art imitating life?