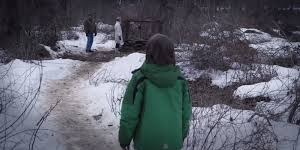 It has been agonizing to watch M. Night Shyamalan over the past decade, a director who came bursting out the gate back in ’99 with The Sixth Sense, a brilliant piece of cold terror that earned him two Oscar nominations and, for me, stayed the course with his next two pictures Signs and Unbreakable. But then . . . it all went belly up. Shyamalan became a punchline, a dead serious parody of himself who in film after film just couldn’t get it right. Like George Lucas, he proved time and again that he’s a great visionary, but as a writer he leaves a lot to be desired.

I’m not going to call The Visit a comeback – he’ll need a few more good movies to earn that. This is a very good, highly entertaining and economical thriller that proves that he still has the knack to tell a good story. Whether it is a fluke or not remains to be seen, but all I can say is that this time he got it absolutely right.

The Visit is a creepy and often very funny movie that blends together every tired horror movie trope in the book (creepy basements, night sounds, the phone out of order, mental patients, creepy old people, ominous warnings, disappearing nosy neighbors) and whips them up into a stew that is fun and entertaining. He even takes the shopworn convention of the found footage movie and makes it palatable. Yes, the whole movie is being filmed by a hand-held camera but there’s a reason for it.

We’re introduced to Becca (Olivia DeJonge), aged 16, and Tyler (Ed Oxenbould), aged 13, who come from a troubled home. Their dad walked out on a whim and their mother is suffering a form of emotional PTSD.  Due to some family trauma early in life, the mother hasn’t seen or talked to her aging parents in years and the kids have never even met them. So, figuring that she needs a vacation, she takes a cruise with her boyfriend and sends the kids away for a week to get acquainted with the grandparents. Tyler’s passion is freestyle rap, while Becca has designs on being a documentary filmmaker – she films he entire trip.

From the moment the kids arrive at the train station, something seems a little off. They meet their grandparents Doris and John, referred to as Nana and Pop Pop. They’re unusual, but since they’re elderly we kind of give them a pass. Nana (Deanna Dunagan) looks like something out of a fairy tale with her long grey hair, her aprons, her baking, and her strange dementia-like symptoms. Pop Pop (Peter McRobbie) looks like he might be at home in a pancake commercial. He is a kindly old farmer who asks the kids to obey two rules: 1.) Don’t go in the basement and 2.) Don’t leave your bedroom after 9:30.

Things are bizarre from the start as the kids wonder what Pop Pop is doing out in the barn and what those strange sounds are in the middle of the night? Why does Pop Pop attack a man across the street and why is Nana sitting in rocking chair laughing at nothing in particular? Skype conversations with their mother assure the kids that, well, they’re old folks and they have their ailments and their peculiarities.

Determined to understand what’s going on, Becca and Tyler do some investigating by leaving the camera in the living room at night to capture Nana and Pop Pop’s activities. What they uncover tells them next to nothing but what they see will no-doubt leave them scarred for life.

The dread intensifies. The grandparents show up out of nowhere and do things that can’t be explained. It gets worse and worse from there and Shyamalan is smart to ramp up the tension by breaking up the days with big blood red letters that announce “THURSDAY MORNING.” Every time we see that it’s a new day, we know that the story is about to go to another level.  He shows his best gifts here at being able to establish tone and mood and the creepy feeling that something is happening.  He spends long chunks of the movie just letting the film’s tone hang in the air, and never seems in a hurry to spring the trap.

Shyamalan’s trademark twist does present itself but it’s not the film’s destination.  He wants wind you up more than he wants to arrive at a conclusion and that, we remember, is what made his early films so great.  He is also adept at making the horror and the comedy go hand in hand.  Much of the comedy is difficult to discuss without spoilers.  Again, it’s not the destination, it’s just part of the tapestry.

If the film has a weakness, it comes in the emotional scenes.  Becca and Tyler have a tragic backstory and it is dealt with efficiently, but those scene don’t seem to fit organically to the horror.  The mixture of horror and pathos worked in The Sixth Sense where we felt the tragedy of Cole’s mother, here it feels like an intrusive add-on.  I appreciate immensely that the two kids are allowed to have a loving bond and typical sibling rivalry that makes them more than just pawns in a horror story – they really feel like living breathing human beings.  They’re the all-too-human link to very inhuman circumstances.

It is so easy to see where this movie might have gone wrong.  It’s a batty, overwrought story that seems to borrow from every horror classic from Halloween to Paranormal Activity to Psycho – there’s a scene where Becca approaches Nana from behind while she is seated in a rocking chair that had me averting my eyes.  It’s a high-wire act.  Either you’ll get on board with this insanity or you won’t.  But you can’t deny Shyamalan’s desire to entertain.  He’s in command of his material here, it may be ridiculous but he’s got you by the throat and by the funny bone.

Posted by armchaircinema on 06/14/2017 in Uncategorized