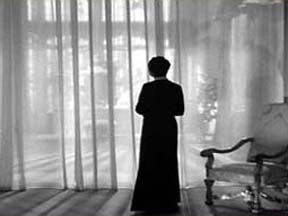 On the surface, Alfred Hitchcock’s Rebecca seems inorganic to the rest of his work.  True, its slow pace and gothic tone are a little jarring after you’ve seen North By Northwest, Vertigo, Psycho and Notorious, but here is a film that can’t be discounted.  It is the most somber of his works and, in the haunting mysteries of the human connection probably comes closest to Vertigo, but it is not quite as deep.

Rebecca is, in many ways, a ghost story.  The spirit in question is not manifested through spectral light or ectoplasm but through the dark emotional chasms of secrets that it has left behind.  That Rebecca de Winter was young and beautiful deepens the loss.  That she was privately scheming and manipulative helps us understand her husband’s disorientation at her loss.

And yet, because this is a Hitchcock film there has to be some form of trickery on his part.  There has to be some form of audience manipulation that asserts his claim that he played us like a piano.  What he does in this film is brilliant.  He presents a central character, Rebecca de Winter, and never once has her appear on screen.  Her story is the entire movie, but there are no flashbacks, no photographs, no voice-overs, no actress credited with the role.  Rebecca exists in dialogue and set decoration.  We see her bedroom, her closets, her old possessions, her furniture, but we never see her.  Her presence is there but she is not.  At one point, Mr. de Winter tells his new wife about the night that Rebecca died.  As he speaks, the camera focuses and on an empty couch and the camera follows the invisible Rebecca as she gets up and walks toward him.  It’s a beautiful trick that plays with our minds – the camera movements create her even though she’s not really there.  Rebecca’s absence was easy to pull off in Daphne du Maurier’s book, but it takes skill to do this in a film.

That’s not the limit of Hitchcock’s trickery.  This was the first film he made after coming to Hollywood and you can already see some of the great tricks that he would later employ.  One constant throughout his work is that he begins the film one way and then turns it into another.  The outward framework of Rebecca is an uneasy love story between a dowdy American girl (Joan Fontaine) and the wealthy but emotionally damaged Maxim de Winter (Laurence Olivier), Rebecca’s surviving husband.  The film opens in the south of France with Mr. de Winter leaning over a precipitous cliff overlooking the sea, contemplating suicide.  He is saved by a shy young woman (Joan Fontaine) who is working as the travelling companion to Mrs. Van Hopper (Florence Bates), a stuffy old bat who talks too much.  This young woman is our guide for the rest of the story despite the fact that she is never given a name.

The couple meets and seems to have nothing in common.  Despite their obvious differences, they fall in love and get married.  From immediate appearances, there is no reason in the world that these two should be together.  They come from two separate social stations and two completely different personalities, but Maxim makes it clear to her that there is something genuine in the way feels about her.  As the trip comes to a close, he brings her home to his ancestral country estate of Manderlay where his wife, the beloved Rebecca, died a year earlier.  Based on what transpires for the rest of the film, it is fitting that the new Mrs. de Winter first arrives at the house during a violent thunderstorm.

In these few scenes Hitchcock does what he does best, he establishes a story that seems to be leading in a certain direction and then switches tracks so we find ourselves in a different kind of story.  Based on the social differences between Maxim and his new bride, one might expect a comedy of errors or maybe a diabolical plot by Mr. de Winter to lead her into a web of deception (or vice versa).  But there is something much more going on, something much deeper than we might at first realize.  This is not a story about a murder in an old dark house, but about the lingering secrets stowed away in a man’s heart and about the curious power of grief and mourning.  A year earlier, Rebecca de Winter, Maxim’s first wife drowned in a boating accident not far from the house.  We can feel the impact of that death through the funerary tone established by those she left behind.

What is best achieved in Rebecca is the somber atmosphere of a house in the weeks after the funeral has ended and the mourners have gone home.  Manderley is still haunted by memories of Rebecca’s youth and beauty and the sadness of her tragic death.  For most of the film Hitch establishes that he is the master of his canvas, making us feel the tone of the story without having to express everything in words.  The light and shadows of the interior of the house (brought to life by cinematographer George Barnes) giving the feeling of a mausoleum.

In this crypt-like setting comes a character that is one of the great oddities of American literature.  Mrs. Danvers (Judith Anderson), the head housekeeper is as stiff and immobile as Mr. de Winter.  Bird-like, dressed in black and with a smooth, cool voice, she moves through Manderlay like a wraith, protecting Rebecca’s memory (her motions and her appearance remind us of Dracula).  She is at odds with the new Mrs. de Winter, feeling that she has come to try and replace Rebecca.  It doesn’t take long before we realize that Mrs. Danvers’ devotion to the late Rebecca more than borders on the obsessive.

Du Maurier’s novel made no bones about the obvious question of lesbian feelings in Mrs. Danvers toward Rebecca.  Nor is the movie despite Hitch’s fight with the censors.  That’s obvious in a moment when she shows Rebecca’s bedroom to the young Mrs. de Winter, boldly opening her underwear drawer than introducing her to a negligee that she keeps hidden under a pillow case.  She resents the new Mrs. de Winter and lets it be known that Maxim can never love her as he loved Rebecca.  Later, at a moment of near-hypnotism, she tries to encourage the young woman the throw herself out of the third-story window.

Who is Mrs. Danvers?  What was her connection with Rebecca?  Late in the film, we learn that Rebecca wasn’t quite the angelic personage that everyone seems to play up.  She was an adulterer, and a bit of a con artist.  Her connection with Mrs. Danvers is mysterious.  Were they lovers?  Or did she admire Rebecca from afar.  Why does she use the “Mrs” salutation?  Was she married?  Why is she so protective of Mr. de Winter?  Why is Rebecca’s memory worth giving up her life?  The fact that we don’t know is the greatness of this story, a story in which most of the secrets remain hidden in the shadows.

The greatness of Hitchcock’s work is his ability to build in us a sense of anticipation.  His characters maintain dark secrets, some of which are revealed and some of which aren’t.  We engage our minds to figure them out and he leaves us with just enough to leave us curious about them.  A lot is revealed in Rebecca but a great deal more remains unsaid.

Posted by armchaircinema on 06/29/2016 in Movie of the Day Blog, Uncategorized