RSS
← ‘Olympus Has Fallen’ is not brilliant, but it gets the job done.
‘Thale’ is moody and atmospheric. → 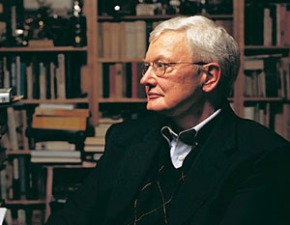 He was my hero.

It may be only once in your life that you come across someone who has a positive impact on you that shapes the trajectory of your life’s ambition. For me, that person was Roger Ebert, a journalist and film critic for 46 years, a television institution and a man whose deep passion for the art of filmmaking came from his bones. It was infectous.

Roger died today from an illness he had been battling for ten years.  Right up until his death, Roger had been doing the thing that he loved.  He went to the movies, he talked to us about them, and we listened.  He was my mentor, the man I looked up to, whose deep passionate love for cinema effected an already deep passion. He just helped me to shape how I constructed it in words.  Second only to my own father, Roger Ebert was the most influential male presence in my life. Best of all, even toward the end of his life, I got to tell him so.

Roger came into my life at just the right moment.  In 1991, just out of high school, feeling a little lonely in the world, I retreated to the place I always go – the movies.  No one around me had the distinct and full-blooded passion for this medium that I had.  Yet, I discovered Roger and Gene Siskel on their TV show.  They took the movies seriously and succeeded in pointing the way to movies that I might not have discovered otherwise.  They were always right there on Channel 42 every Saturday at 3pm.  They were unflinchingly honest.  The bad movies they scalded.  The good movies they praised.  The great movies they seemed to carry on their shoulders.  They always claimed that their show was doing a public service.  They would warn people away from bad movies and toward better ones.  It didn’t work on everyone, but it certainly worked on me.

They were funny.  Once on the show, Roger reviewed a bad Stallone movie called ‘Daylight’ and commented “Look, I could name all of the movies that this movie rips off but we don’t have time on a half-hour show.”

From Roger, I began to read his reviews in the newspaper.  He communicated in a clear and precise way.  He helped you understand his joy or his frustration.  You could feel that he loved movies and you could feel that he wanted to communicate that to you.  Eventually, as I listened, I began to communicate with him.  In 1998, I wrote a reply to his Answer Man column about black and white vs. color films.  He emailed me: “Your message made my heart sing!”  That was the first thing he ever said to me.

From there I began a sporadic but continual correspondence with Roger that would last until his death.  In 2009, he asked me to do a project for him.  In his blog, he wanted to collect quotes from the TV show.  I provided at least three dozen and he was very grateful.  The last time he spoke to me was via an email was on my birthday.  I said, “I’m 41 today.  I want to spend the next 41 years of my life going to the movies for a living. That would be the perfect life.”  He responded “Will, not would.”  This is the last thing he said to me.

When I met him in 2011 at his film festival Ebertfest (thanks to the persistance of my wife), it was a moment that I will treasure.  At that point, he couldn’t speak.  Cancer had robbed him of his speaking voice and a portion of his lower jaw.  When I and my wife approached him after a screening, I introduced myself and he pointed at me as if to say “I know you.”  Then he patted his chest.  I am never sure if he really knew who I was or if he was just humoring me, but it touched me deeply.

Based on his example, I am now on my way.  I want to spend my life doing the thing that I love, just as Roger did.  I don’t want to be him, but I want my career to be inspired by him.  He pointed the trajectory of my life.  I will do my best to make him proud.

← ‘Olympus Has Fallen’ is not brilliant, but it gets the job done.
‘Thale’ is moody and atmospheric. →